For many people around the world, the way Santa works is a true mystery. Team YANTSU and NORAD have found multiple clues as to how one man can travel the whole world in just 24 hours.

Santa maintains a long list of children who have been good throughout the year. His list gets bigger each year by virtue of the world’s increasing population. Check out the world’s population right now.

As a result, Santa has had to deliver more toys in the same amount of time. If one were to assume he works in the realm of standard time, he would have to limit his stay to about two to three ten-thousandths of a second per home!

The fact that Santa Claus is more than 16 centuries old, yet does not appear to age, is our biggest clue that he does not work within time as we know it. His trip may seem to take around 24 hours, but to Santa it may last days, weeks or even months in standard time. Santa would not want to rush the important job of distributing presents to children and spreading Christmas happiness to everyone, so the only logical conclusion is that Santa functions within a different time-space continuum than the rest of us do. Based on historical data and more than 50 years of NORAD tracking information, we believe that Santa Claus is alive and well in the hearts of children throughout the world.

Santa Claus is known by many names, including Saint Nick. Historians claim that the history of Santa starts with the tradition of Saint Nicholas, a 4th century Christian priest who lived in the Middle East in an area of present-day Turkey who became famous for his kindness. He was known for giving gifts to the less fortunate, sprinkling gifts of gold down people’s chimneys or hiding surprises in their stockings.

It may be that the Santa we know today emerged from the legacy of Saint Nicholas. Clearly, Santa’s basic approach to gift giving is strikingly similar. Could they be the same person? Only Santa Claus knows for sure.

Long before the Wright brothers flew the first airplane or the Montgolfier brothers launched the first hot air balloon, Santa had to find a way to travel from house to house at great speed. We know from our Santa Cam images that Santa’s choice for quick transportation was a herd of flying reindeer. Detailed information on these reindeer remains elusive; we do know, however, that Santa enlisted the reindeer to help him with his worldwide mission of gift-giving. A veil of sweet mystery hides the rest. Do you know the names of all Santa’s reindeer?

Virginia’s letter, written in December 1897, is the most famous example of a child wanting to know about Santa.

When does Santa take off and land?

Based on historical data and Team YANTSU records, we have determined that takeoff preparations begin at the North Pole at approximately 12AM EST on December 24th and takes off during a time period of 4AM-7AM EST. Exactly 24 hours after this time, Santa finishes regular deliveries, ending in Hawaii. After this, he continues to deliver to homes where children had not yet gone to sleep or locations that were not on his original route. This takes an additional 5-6 hours, but tracking ends.

How does Santa cover the entire world in one night?

We have determined that Santa lives in a different space-time continuum than we do. If he lived in ours, then he would be in each house for just three ten-thousandths of a second! Wow, that’s fast! Santa takes breaks during his trip around the world – especially for snacks left by children. Do you put a snack out for Santa? Kids all over the world do. Some even leave carrots for Santa’s reindeer (carrots are their favourite food).

Leaving cookies for Santa is a tradition for many families. Imagine eating that many cookies in one night (burp)!

Santa’s sleigh is a versatile, all-weather vertical/short take-off and landing vehicle. It is capable of travelling vast distances without refuelling and is deployed, as far as we know, only on Christmas Eve and briefly for a test flight about a week before Christmas. 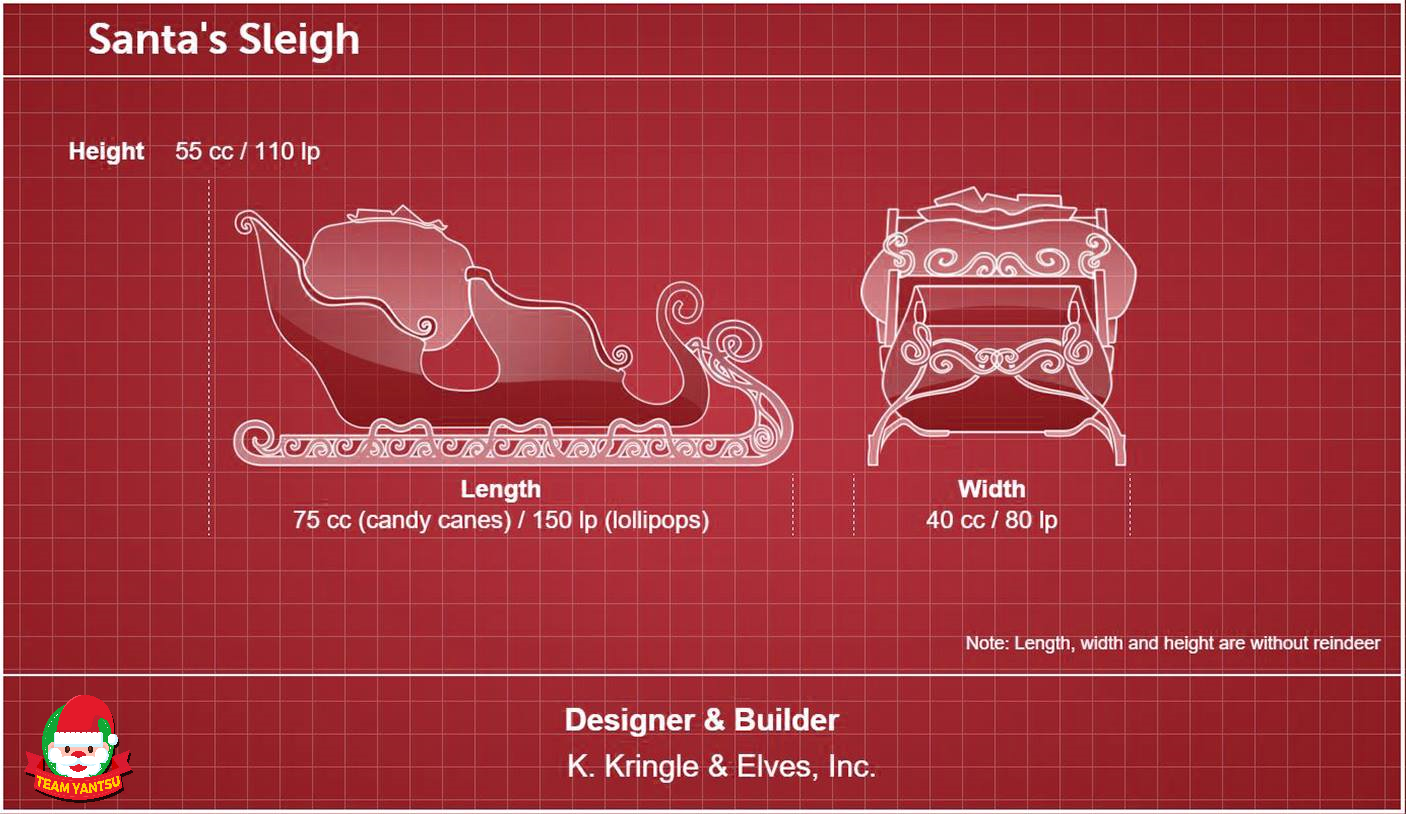 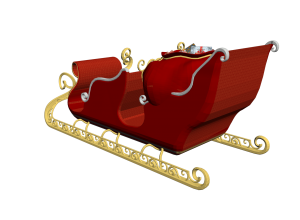 Santa’s Christmas gift sack is made of the stretchiest, but sturdiest, fabric on Earth. Crafted by elves, the sack material is a secret, but is capable of holding nearly 250 billion presents. That is big enough for the world’s population of 7.7 billion to grow for years without the sack running out of space for gifts. With that huge load, no wonder those reindeer need a whole year to rest!

Note: No gift has ever been damaged by turbulence.

Santa’s sleigh is equipped with state-of-the-art technology that enables his propulsion skis to fly at the speed of light, making the delivery of gifts easier on Christmas Eve.

Santa’s Christmas Eve trip around the world takes approximately 24 hours to accomplish. He departs for his journey at 4:00 a.m. EST December 24, with every present delivered no later than 4:00 a.m. EST December 25. His return trip to the North Pole takes significantly less time, about 16 hours, as the load on the sleigh is much lighter (except for the milk and cookies in Santa’s stomach and the carrots in the reindeer!).

Although Santa typically rides alone (except for his reindeer, of course), the sleigh seat was built to accommodate helpers. Mrs. Claus has assisted with the Christmas festivities nearly a dozen times, while various elves over the centuries have helped Jolly Old St. Nick ensure all children on Earth receive their gifts on time.

The probable first flight of Santa’s sleigh was on Dec. 24, 343 A.D. Despite the many years it has been in use, it has never been replace (although it almost crashed in 1931 near Paris’ Eiffel Tower). The elves fine-tune the sleigh each December and perform a test run about a week before Christmas, but other than that, its solid construction has served Santa for many, many years. 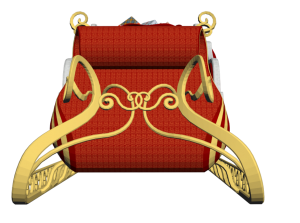 How is it that Santa and his reindeer have been making their Christmas Eve trek for centuries? The temperature at the North Pole sustains both human and animal life indefinitely, a result of the cool climate combined with cheer and Mrs. Claus’s delicious holiday cookies.

Santa’s team of reindeer has remained the same ever since the first Christmas Eve ride in 343 A.D., with the exception of Rudolph, who was permitted to join in 1031 A.D. A second cousin of Dasher, Rudolph was promoted to the front of the pack and allowed to be hitched solo during his first outing, as his red glowing nose proved to be a source of light that helped Santa navigate in the dark.

Reindeer shed nearly 75% of their hair during the summer months at the North Pole, with Santa’s elves helping by spending two hours a day in June brushing them. Although the temperatures in the North Pole rise only to approximately 30º Fahrenheit (-1.1º Celsius) during that time, compared to Christmas-time temperatures of -30º Fahrenheit (-34.4º Celsius), it feels like summer to Rudolph and friends! 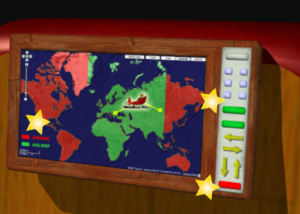 Santa’s sleigh features a high-tech console that uses GPS combined with 2-D visualisation to best plot his Christmas Eve route. Through simple data inputs, Santa can adjust his flight pattern to hone in on those who have gone to bed and fallen sound asleep.

By pressing the green buttons on the sleigh’s computer console, Santa tune into Christmas music that radio stations broadcast by satellites orbiting the Earth. Santa is partial to “I Saw Mommy Kissing Santa Claus.”

The red button on Santa’s console is actually a hot chocolate dispenser to keep him alert, warm, and, of course, jolly.